Drawing on China’s two-thousand-year history of shadow puppetry, Tiger Tales features an artful blend of Eastern and Western, ancient and contemporary techniques that is the hallmark of all CTW productions.  It is a show that excites audiences of all ages and has been widely acclaimed and performed across America, South Korea, Taiwan and China, notably at the 2005 First International Shadow Play Festival in Tangshan, China, where it won citations for Best Performance, Best Short Plays, and Best Voice-Over Narration. At the 2009 Shanghai International Puppet Festival, Tiger Tales was honored with awards for Best Directing, Best Puppet Design and Arts Innovation. Tiger Tales is performed in English accompanied by traditional Chinese music.

Based on popular Chinese folktales and literature, the story deals humorously with issues of power and survival of the small and powerless in the modern jungle, in which the proverb, “working for the emperor is as dangerous as working for the tiger” still holds true.  The stories are narrated by a wise old rabbit, telling her granddaughter some of the adventures of her eventful life, including her hair-raising encounters with Tiger, the reigning King of the Jungle. 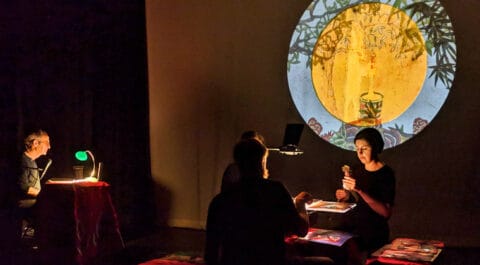