Two family-friendly performances at 1 PM and 3 PM to celebrate the Year of the Rabbit with Hao Bang-ah, Rabbit!, featuring traditional budaixi-style puppetry and live music. Both performances will be followed by hands-on workshops for children.

Lunar New Year, the most important traditional festival in Asian cultures, marks the start of a new year following the moon cycle. Each year is represented by one of twelve zodiac animals and 2023 is the Year of the Rabbit, commencing January 22. The Rabbit is known to be the luckiest out of all twelve zodiac animals, symbolizing such character traits as creativity, compassion, and sensitivity.

Each year, Chinese Theatre Works celebrates the Lunar New Year season with an original “budaixi,” which is a traditional Chinese glove-puppet production that features the twelve animals of the Chinese zodiac. This year’s show stars the Rabbit, who will preside over a jolly selection of wild puppet skits, dances, popular songs, and well-known Chinese sayings that celebrate the wit and wisdom of the zodiac animals. 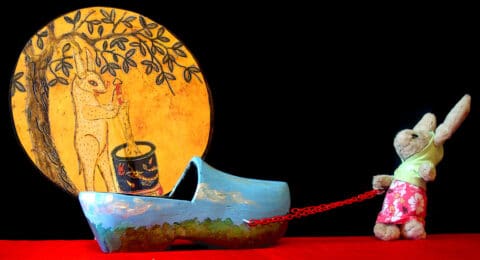